MY BRAIN HURTS: thanks and farewell to Jeff Dunn

Back in November, the RealScientists community was privileged to hear from Professor Jeff Dunn/@jeffreyfdunn, of the Department of Radiology, University of Calgary in Canada. Calgary is well known as the home of the Stampede, the Flames and the ’88 Winter Olympics; it’s also home to Jeff and his research into the use of magnetic resonance imaging (MRI) in studying the brain, both in health and in illness and injury states such as multiple sclerosis, stroke and concussion. 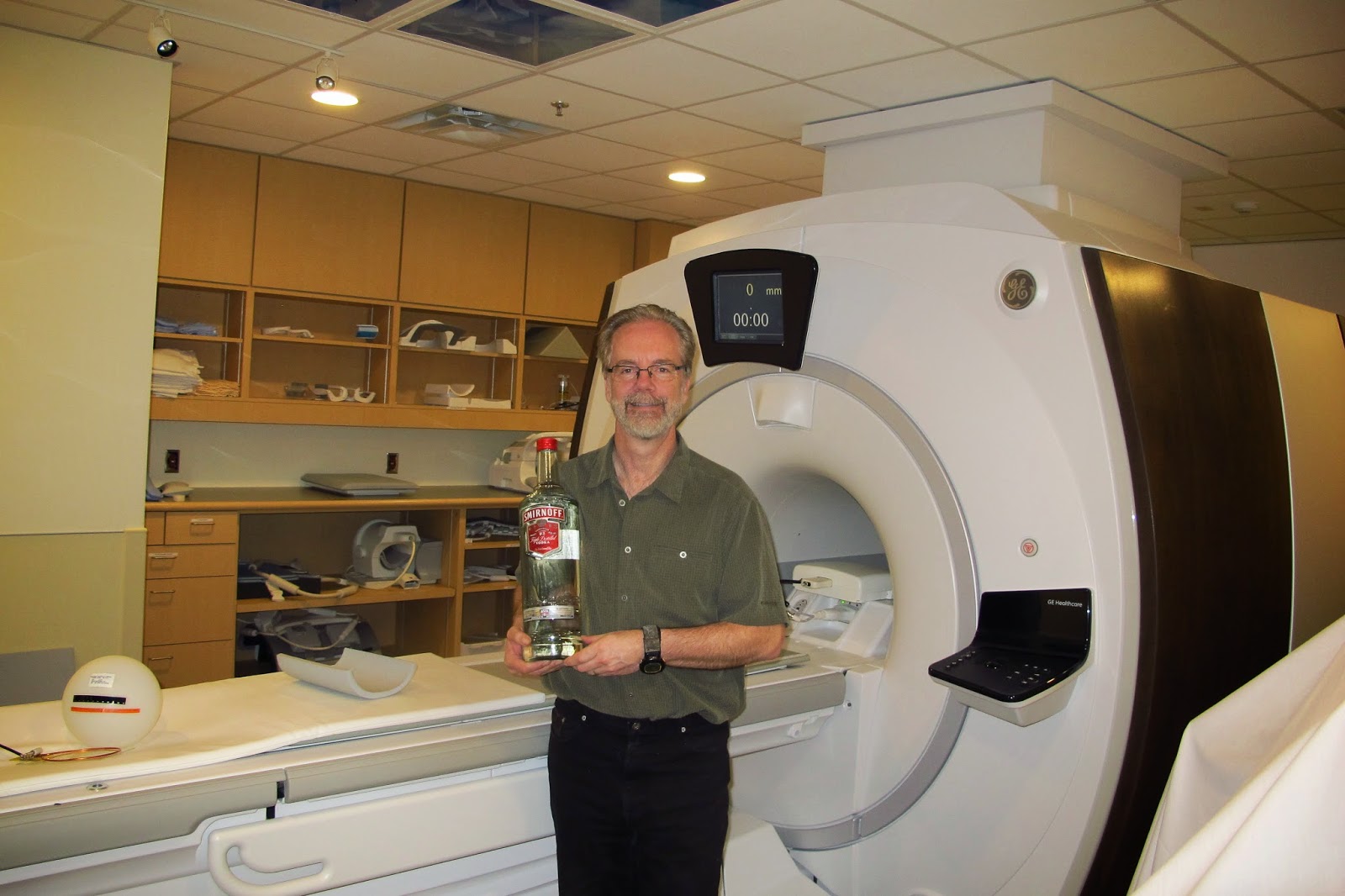 Prof Dunn with the 3T MRI of the Alberta Childrens Hospital (@UofCr4kids) and a 13C phantom of his personal preference. Image via Prof Dunn’s personal blog, jeffdunn.blogspot.ca)

And, of equal importance, its role in studying classic rock of the early ’70s.

After his stint on the account, Jeff was kind enough to offer his thoughts on his week of curation and his experiences communicating science online.

How did you find your week as a curator?

I enjoyed it, but found it tough to balance the time needed to keep my lab going with the time on twitter. I was a bit nervous when I got a reply that was a bit chippy once. But they calmed down and all was well. I want to thank the RS community for their interactions and their overall polite demeanor. Removing emotion is the first step to having a good intellectual discussion.

It can be a shock talking to so many new people. Did you find the sudden rush of interactions (good and bad) daunting?

That first tweet is daunting. After that it was fun. So, it was as expected.

Darwin used to walk a path in his garden with a student or two and talk science. I get to talk to 14.7k “students of science” simultaneously

Is there anything you wanted to get out of / do on the RS account that you didn’t manage to fit in?

I wanted to talk more about the problems in science right now, but I got the feeling that this was only interesting to a very small number of followers. I guess one changes the world in small steps!

Do you consider yourself to be a science communicator?

Just putting it out there..this forum is excellent for career advice w scicomm people as well as researchers in uni and companies. Ask away

What’s your impression of the science community on twitter? The RS community?

I’d like to see more career scientists engage people who do science communication. Science reporting in major outlets is often biased—perhaps to sell air time or journal copy. The internet provides the possibility of unfiltered information. Yet how can people identify who to trust? Twitter itself is too unfiltered as anyone can call themselves an expert and throw out opinions. I’m pretty impressed, however, about the level of science understanding in most people I see on twitter. The RS community is very polite and easy to engage. If I didn’t have a real job, I would have liked to spend more days with the community.

How would you go about getting more people interested in science on the net?

Great question. Perhaps run a program with a high school on interesting science websites? Perhaps Realscientists could make a page on science communication and blog sites?

Do you have any tips or advice for future RS curators?

Plan some lines of discussion and thought in advance. If possible, make some blogs that you can role out to keep the discussions going. Line up some photos. People liked the pictures. If I curated RS again, I would have a bit more prepared beforehand. I would also try to free up my academic schedule a bit more.

Did everyone know that Mark Twain knew Nikola Tesla? This is Tesla’s lab. He is looking on from the back of the photo pic.twitter.com/6ZagTY3AgM — realscientists (@realscientists) November 20, 2014

Other than yourself of course, are there any other people/accounts that people should follow if they liked you and what you covered?

Finally, what TV show do you think everyone should go watch right now?

Who can’t resist Dr. Who. Actually the Nature of Things from CBC is excellent if you can get it.

Thanks again to Professor Dunn for a tremendous week of curation on RealScientists. If you missed out on any of Jeff’s tweets, check the Twitter archive for his week on the account. Keep track of Jeff’s research via his Twitter account@jeffreyfdunn, and his blog jeffdunn.blogspot.ca.