Mutate or die: farewell and thanks, Dr Trent Yarwood

‘Real science from real scientists, communicators, writers, artists, clinicians.’ OK so this year hasn’t seen so much of the latter, until this week where RealScientists featured our first clinician curator, infectious diseases specialist Dr Trent Yarwood of tropical far north Queensland. Trent’s curation coincided (although that suggests it wasn’t planned on our part!) with Antibiotic Awareness Week, tying in with his clinical role as leader of his hospital’s antibiotics stewardship programme. As Trent discussed during his week, these are dark times for antibiotics and the people who love them.

Bacterial resistance to antibiotics is on the rise, aided by antibiotic overprescription and overuse in non-medical applications such as agriculture; rather than breeding contempt, familiarity breeds resistance, through selective pressure on bacteria to evolve a way around the challenge each antibiotic poses. Mutate or die, as Luger Boa put it. Added to that, pharmaceutical companies have bailed out of developing new antibiotics, due to the poor return on investment that antibiotics provide – expensive to develop, rapid obsolescence due to resistance, and the likely markets are largely poor third world countries…. at the moment, anyway. It’s been left up to academic research labs to take up the challenge of developing new antibiotics – often by recycling, redesigning or repurposing old antibiotics for new niches or new targets. 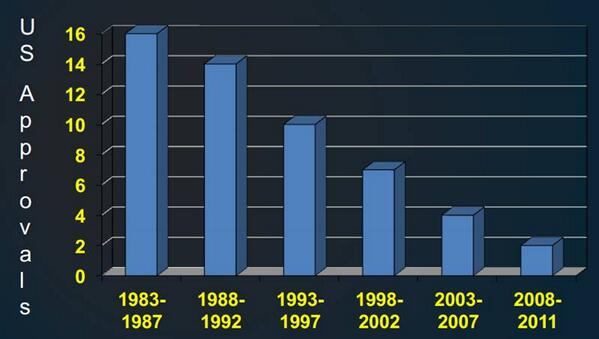 New antibiotic drug approvals. Yes, this graph has a dodgy Y axis, but you get the point.

All this means it’s critical to make the best use of the antibiotics we have; don’t prescribe them inappropriately, and save the tactical weapons for when they’re really needed. Making what people like Trent do as important to the science of solving infectious diseases as anything done in a research lab. For that, and for a tremendous week on the account, we thank Trent. Keep following him on his personal account @trentyarwood, and if you missed anything this week catch up on Storify: Part 1 | Part 2.